When it comes to A-list style, celebrity hairstylist Jet Rhys has her finger on the pulse.
“It gets me going when I see a beautiful woman put together head to toe,” she says, discussing what inspires her creative energy. “I get excited when I see people dressed up–great shoes, great bags. Put a little effort into it,” she adds. “No flip-flops.” 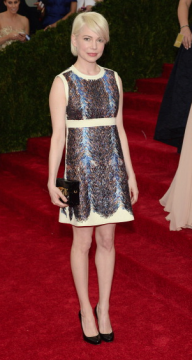 “Even though her Louis Vuitton ad is from 2014, woman still have that picture in their purse and they carry it around with them,” Rhys says of the actress’s cut, cropped with bangs swept to the side. “I see that haircut paired with a trouser suit–that’s so hot for spring–for day and evening.”

“It’s carefree, but it’s done on purpose with a curling wand,” Rhys says of the singer’s waves. “She’s no wallflower, but bohemian and ubersexy, groomed boho.” And the same goes for the clothes. “I see Taylor Swift wearing bohemian, flowy [looks] for evening.”

“She’s causing a real stir with our younger clients with her bright, fire-engine red hair, androgynous cuts, and rosy cheeks,” says Rhys. “Her short little pixie is iconic like Twiggy.” Rhys sees Rocha in “denim everything. But really in jumpsuits she’ll look superfierce.”

“Her new swingy bob [goes] with everything suede,” says Rhys. “A little cropped top and a skirt” complements the look, and the material hits on the Seventies inspirations for spring.

Rhys, weighing in on the increasingly popular long bob, or “lob” for short, calls the look the “ultimate little black dress of haircuts. It’s the varying lengths, anywhere from the chin to the base of the neck. Once it goes pas your collarbone, it’s a whole different haircut.

“Long hair was a staple for the last five years; now there’s a call to order for short haircuts,” Rhys adds. “Long hair is going out. The bob, lob, middy…like red lipstick, it will never go out of style.”