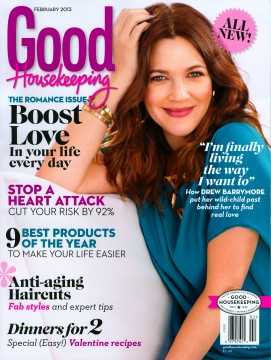 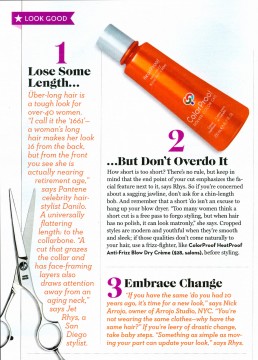 Über-long hair is a tough look for over-40 women. “I call it the ‘1661’– a woman’s long hair makes her look 16 from the back, but from the front you see she is actually nearing retirement age,” says Pantene celebrity hairstylist Danilo. A universally flattering length: to the collarbone. “A cut that grazes the collar and has face-framing layers also draws attention away from an aging neck,” says Jet Rhys, a San Diego stylist.

…But Don’t Overdo It

How short is too short? There’s no rule, but keep in mind that the end point of your cut emphasizes the facial feature next to it, says Rhys. So if you’re concerned about a sagging jawline, don’t ask for a chin-length bob. And remember that a short ‘do isn’t an excuse to hang up your blow dryer. “Too many women think a short cut is a free pass to forgo styling, but when hair has no polish, it can look matronly,” she says. Cropped styles are modern and youthful when they’re smooth and sleek; if those qualities don’t come naturally to your hair, use a frizz-fighter, like ColorProof HeatProof Anti-Frizz Blow Dry Crème ($28, salons), before styling.

“If you have the same ‘do you had 10 years ago, it’s time for a new look,” says Nick Arrojo, owner of Arrojo Studio, NYC. “You’re not wearing the same clothes–why have the same hair?” If you’re leery of drastic change, take baby steps. “Something as simple as moving your part can update your look,” says Rhys.